GORDON Ramsay showed off his incredible skills last night on Future Food Stars – but not everyone was impressed.

The Michelin-starred chef was presenting the second episode of his competition series and presented the contestants with a challenge.

The contestants – all of whom own food/drink businesses but aren’t professional chefs – were asked to fillet a salmon.

Gordon has been in the industry for years, and explained to the hopefuls what they had to do.

The tricky task involved filleting the fish without wasting a single bit, chopping them into perfect 200g pieces.

He wasted no time showing them exactly how it should be done, saying: “I’ve done this so many times, I could do it with my eyes closed”.

The chef then added: “In fact, that’s what I’m going to do”, reaching for a blindfold.

His bold move shocked the contestants, with many covering their mouths.

He then started slicing the salmon down the spine, separating the meat from the bones perfectly.

Like the expert he is, Gordon filleted the fish perfectly without wasting a single piece.

He then chopped the fish into near perfect 200g pieces, with the first coming in at 199g.

The chef’s trick backfired with the show’s fans as they weren’t impressed, finding it “weird”.

One wrote: “The fact this show always has to start with a 15 minute Fear Factor segment is such a weird choice”.

Another said: “A blindfolded chef?!? I swear this show gets more bizarre by the minute!”

As another agreed: “Now you’re just showing off, blindfolded.”

A few viewers pointed out that this trick from Gordon is recycled, as he’s previously done the exact same thing on Masterchef US, with a chicken. 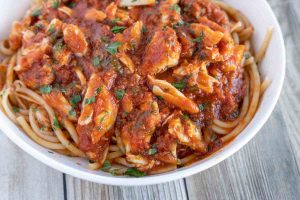